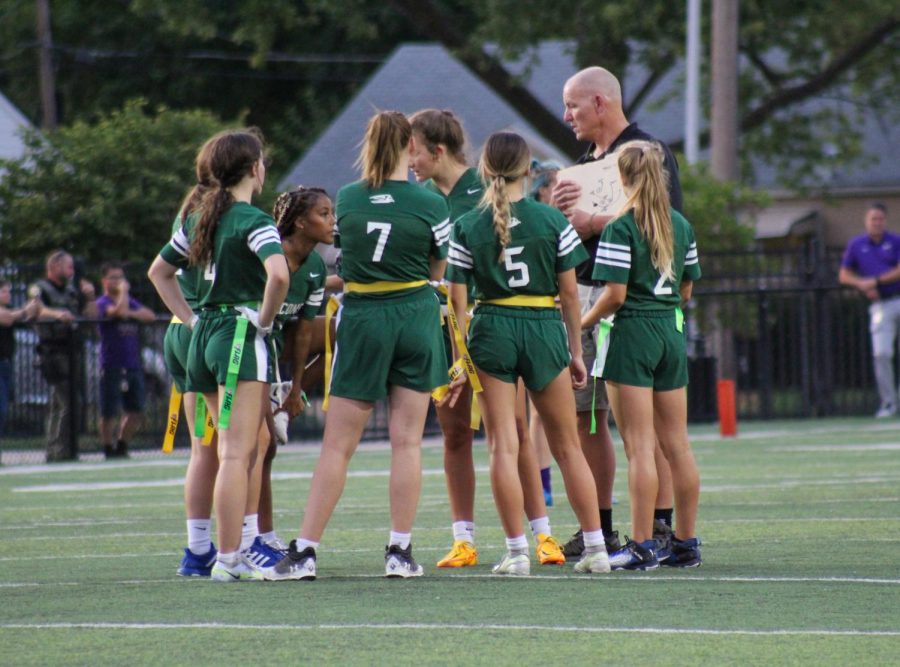 During the flag football game against North Kansas City High School Sep. 2, the team huddles in discussion. The flag football team lost 6-13. “It was really nice, just playing with them and getting to know them to the level that we did," Katy Taylor said.

The school year kicked off with the fanfare surrounding the school’s first-ever flag football team.

Veteran football coach Shane Taylor brought his decades of experience to the team as the head coach. He also coaches track and field.

“It went really well because the girls seemed to enjoy what they were doing,” coach Taylor said. “They learned a lot, and we got to compete a little bit, so I think it was a success.”

The district’s teams were sponsored by the Kansas City Chiefs and the NFL. Activities director Christopher Neff said the proposal came about last minute toward the end of last school year when the Chiefs offered the program to the schools.

“The Kansas City Chiefs and the NFL have always had an initiative to try to get more participation, especially with females,” Neff said. “We were really going to have a hard time finding people to do it, but I was really proud of our coaches and the girls that stepped up.”

Junior Jillian Housh played center offense and cornerback on defense. She said she joined the team because she enjoyed watching football with her dad.

“I’m pretty educated on how football works,” Housh said. “So I thought it would be a fun sport to try out. It would be cool to kind of pave the way for other girls.”

Her favorite moment of the season was playing at the jamboree.

“We had a full stadium of fans, and it was an intense game,” Housh said. “It was the first game, so it was a big deal.”

“They just wanted to learn stuff and be better at what they were doing,” coach Taylor said. “In a lot of ways it was probably more enjoyable to coach people who didn’t have preconceived ideas and notions about what football really was.”

Junior Katy Taylor, his daughter, was the quarterback and played right safety. She said she had mixed emotions about the season. She said having three months of practice for two games was disappointing.

“We were just very discarded, and so it is really frustrating for all of us,” Katy Taylor said.

Despite the challenges, Katy Taylor said she liked bonding with her teammates.

“We all became really close by the end of the season, which is kind of unexpected because a lot of us are not really social people,” Katy Taylor said. “Regardless of how our season went, I think we came away just stronger people in general.”

Coach Taylor said the team initially thought they would have more games than they were given.

“I think there is a lot of frustration on the girls’ part because they put a lot of time and effort into it, learning and trying to get better,” coach Taylor said. “So at the end of the day, I think it was kind of hard for them to only get one real competition.”

Neff said it was difficult to get the sport off the ground without the support of other school districts. He hoped to continue the sport next year and get more schools involved.

“Our hopes are that it will become more,” Neff said. “We are in discussion on how we are going to move forward with it and ways we can try to incorporate other school districts.”