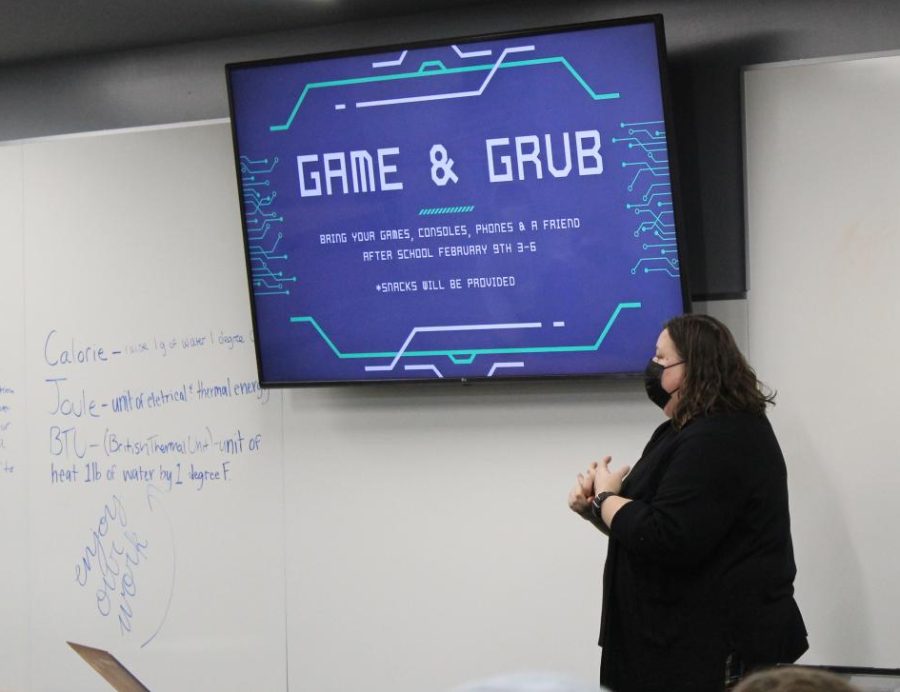 At the first informational meeting for e-sports, coach Janet Sobbe goes over a presentation Jan. 26 in the Innovation Center. Sobbe and teacher Sherri Butts coach the new sport together. "I thought it would be a cool experience for kids, and I was excited to be a part of making that happen," Sobbe said.

Student gamers now have a varsity sport. E-sports is a MSHSAA sport coached by teachers Sherri Butts and Janet Sobbe.

“Coach Butts and I had been talking about it,” Sobbe said. “She games, and I gamed in college a little bit, like a long time ago.”

Junior Isabella Keiwel has been a gamer most of her life. She said she was excited the school was offering something new that she was interested in.

“I grew up around video games,” Keiwel said. “My parents are gamers and so are my siblings, so it’s always been a part of my life.”

Sobbe said with the sport just beginning, they were starting small.

“We’re going to start with 10 computers, so that’s really only 10 people that can compete at a tournament,” Sobbe said.

Though there were a limited number of PCs, Keiwel said she was excited to use the new computers.

“I have one at home, but I’m excited to see what kind of SPECs they have and how well they run,” Keiwel said.

Sobbe said she hoped to meet a few times a week after school, and she wanted to create a community for gamers and to be competitive.

“There’s a place for kids to meet after school and meet up and game but also have people competing,” said Sobbe.

They planned to set up tournaments with other schools, and Sobbe encouraged anyone interested in e-sports to stop by to see what it’s all about.