Athletes Grow Up In Wrestling Program 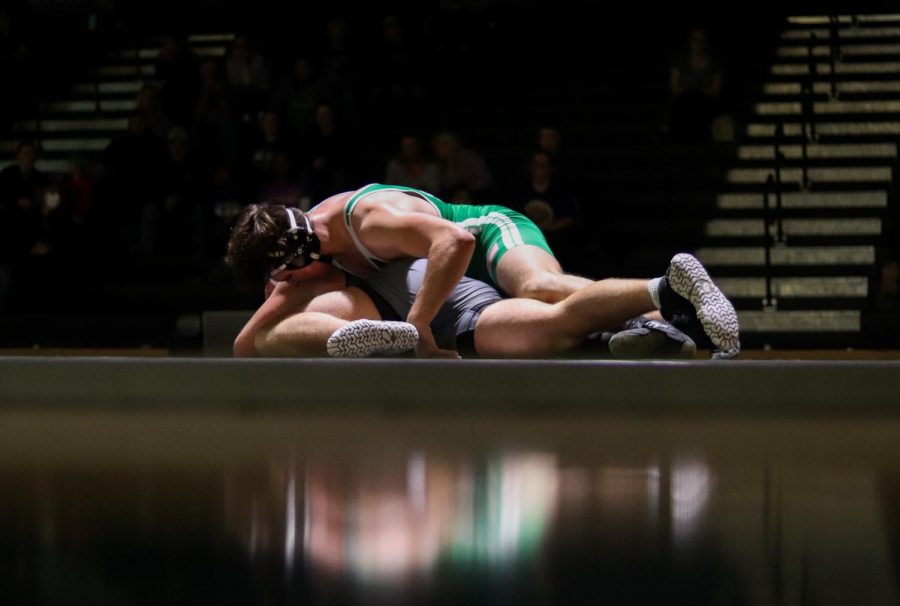 In the Falcon Fieldhouse during the wrestling duel against Kearney High School, junior Jack Stoffel goes for a pin on his opponent in Dec. 9. Duels provide an environment with different lighting and setup as compared to a normal meet. “It’s really awesome,” Stoffel said. “Especially when we’re at home, it has a big team aspect. We are all cheering each other on and it’s really energetic and fun.”

The boys wrestling program is more strategic than people may think. Wrestlers often start the sport early in elementary school and continue through high school, often because of the intentionality put into their retainment. Wrestling coach Elisha Bears said coaches observe wrestlers when they are younger in hopes of figuring out who will continue in the sport on a high-school level.

“We have two opportunities to look at wrestlers,” Bears said. “The first is through our youth program called Team Central Wrestling. We have three levels, and I try to get in to see each of those levels.”

Bears said coaches in the program like to track how many athletes in each grade are interested in wrestling and then focus on recruitment and retention, especially if the group for that age is smaller. He said typically coaches like to look four to seven years in the future to try to make sure there will consistently be wrestlers joining the team.

Though the coaches do not train the students until high school, they spend time connecting with the younger wrestlers in their middle school years.

“We’re more there to support them, give them high fives, encourage them, to say hello, to create those relationships,” Bears said.

A group of students who have grown up in the program are the senior wrestlers. Bears has coached them throughout high school, but he has known them for many years.

“Most of the senior kids that we have right now grew up in our youth wrestling club,” Bears said. “I had at least seen them every couple of days throughout the season, but then I have coached all of them since they were freshmen.”

“Bears has been really good about getting us through the high-school experience,” Marrah said.

Before they started high school, Staley coaches knew about each of their now-senior wrestlers.

“We knew coming up that they were very proficient in what they were doing,” Bears said. “We knew talent level and weight because we have 14 weight classes; what weights they might fit into early and what we would hope they would grow into as they got older.”

Over the years as the senior wrestlers dedicated time and effort to their sport, the coaches spent time helping them grow as wrestlers and as people.

“They have continued to become better wrestlers, better people, better kids inside the classroom,” Bears said. “What I will take away from them is just that growth mindset and that ability to grow as people.”