Getting Ready To Rumble

A New Team In Town 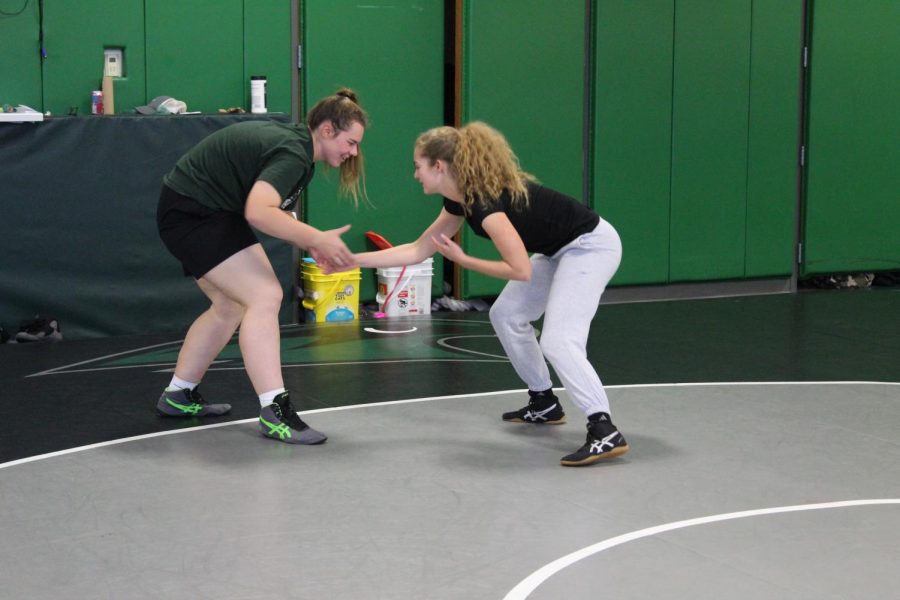 Sophomore Madison Schmude and Remi Asta, sophomore, partner up before practice to start warming up on November 8th. They start by hand wrestling and working other wrestling moves on the mat. The season started on October 29th. “What happens in the wrestling stays in the wrestling room,” says Schmude.

The wrestling team is working to form a separate girls’ team this upcoming season. So far, there are a handful of girls who are interested in joining the team, and although there is a smaller number than expected, it could be enough to form a team. It is too early to know officially due to unset rules and regulations. As of now, it is still up in the air. For the girls that are wrestling, this is a time to show their athletic abilities and gain support from the student body.

“We don’t have enough girls to form our own team yet, but we are trying,” said senior female wrestler Camryn McConnell.  “There’s not an exact number of wrestlers yet, because the number of girls that come to practices fluctuates,”

Preseason practices have started. During this time, girls have the chance to work on running and conditioning.

There was a meeting for potential girls’ wrestlers on October 11, and there were eight attendees.

Wrestling season is set to officially begin in early November since it is a winter sport.

Like the boys’ team, there would be lots of fundraisers and tournaments held at Staley during the year to help support the girls’ team. Students can come out and support new athletes.

If the girls’ team is established, the boys’ team and girls’ teams will not wrestle each other. They would no longer be considered as one Staley wrestling team. However, there would be joint practices between the girls and boys after school and before tournaments and duals.

“The weight classes have still not been separated and established yet,” said assistant wrestling coach Nic Brent when explaining why the girls’ team is not official yet.

As for now, regardless of whether the girls’ wrestling team becomes an independent league, the athletes will wrestle among the boys’ team as they have in years past and will still have the same opportunities to compete as the boys.