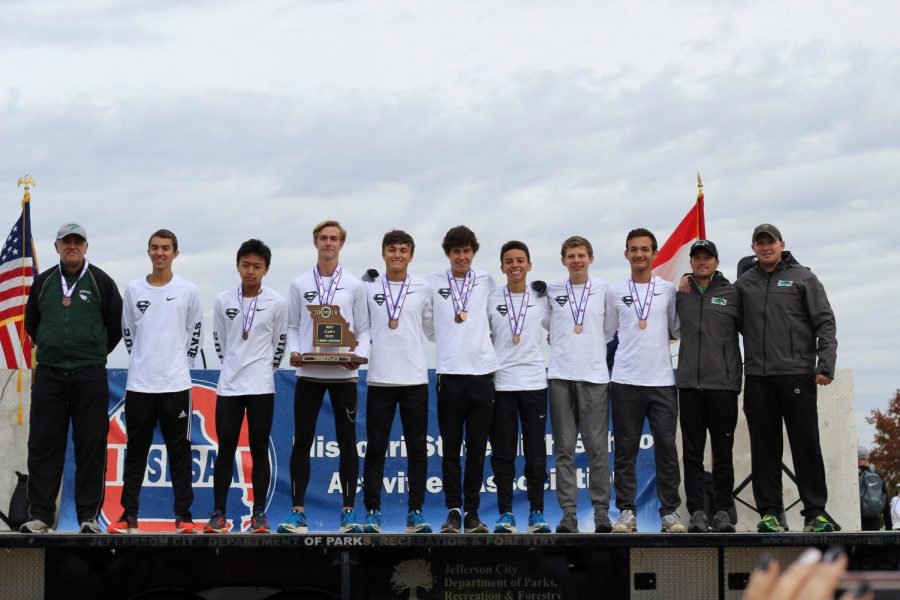 After winning third place as a team at cross country state Nov. 3, runners juniors Murphy Corum, Nathan Nguyen, senior Preston Wheeler, juniors Luke Winkler, Jack Warner, Collin Riggins, sophomores Dawson Walker and Drew Sallman stand while wearing their new medals. This was the first time since 1983 that a North Kansas City School District school made it to the podium at state. "It felt great to be up there with all the guys. We had worked all year for that moment and we all did our part to make it possible," said Winkler.

The boys cross-country team placed third at the Class 4 State competition this past weekend. The last time a team in the North Kansas City School District made it to the winners’ podium was 1983.

“I was really excited, because I know we have had guys that did well individually, and that’s always fun, but none of us had ever placed that high as a team before, and nobody in the district has either in a very long time,” said junior Jack Warner. “I know it was special for us and the parents and coaches.”

“This is my 29th year as a cross country coach, and I’ve never had a team make the podium, that’s how big this is,” said head boys and girls cross-country coach Todd Warner.

Three runners from the girls cross-country team qualified for state individuals. Seniors Haylee Roberts and Maddie Pare and junior Alex Hamre qualified. Hamre placed 15th, and it was her third trip to state.

“I think the thing I’ll remember is being at the three-mile mark and seeing the team perform. When I saw the fifth runner come through in good shape up in the middle of the pack, I thought ‘I think we might have this,’” said coach Warner.

“It’s a process I plant the seed, and they do the work, and it could be something I said to them as a freshman, and we keep building on it,” said coach Warner. “My coaching staff, coach Adair, coach Bears, coach Maultsby and myself throughout the year would put little seeds of ‘Hey, that was a great workout,’ ‘Hey, I think you’re ready,’ ‘Hey, we got this,’ and try to build confidence over a long period of time.”

“To have that happen was incredible and to have my son on the team made it even more special. I’ve known some of these kids that I’m coaching since they were 5, 6, 7 years old, and to have the other coaches from the other schools around here congratulate us, it was just a great day,” said coach Warner. “I love the sport. I love the comradery of the other teams, and it was definitely something that I was glad I could experience before I retire.”