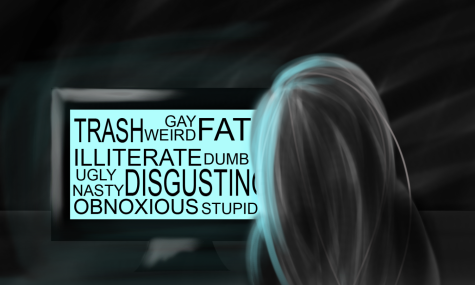 Pain. That’s what cyberbullying brings into teens’ lives. It makes people feel alone and like they aren’t worth it, and it oftens makes people hide instead of telling an adult. Cyberbullying is as wrong as it is to go up to somebody’s face and call them vicious names.

One out of every four teens has experienced cyberbullying, and it has affected adolescent lives in a drastic way, according to cyberbullying.org.
Social media makes it easier to target people, and many people use these apps for just that.

NBC News reported that a 12-year-old girl from New Jersey named Mallory Grossman was told through Snapchat, Instagram and through text telling her to
kill herself. Mallory committed suicide.

People around the world are threatened and bullied online every day. It’s not just adolescent girls being attacked online, but it’s also just as likely for boys to experience this, according to cyberbullying.org.

Stories like Mallory’s show the seriousness of cyberbullying and that there needs to be a change. Teens shouldn’t have to worry about others slandering them on social media or saying negative things in the comments section on an Instagram photo.

There needs to be a solution. Spreading love and positivity is something all of us should be doing. We can block the bullies from social media, but something more needs to be done. A point needs to be made to educate kids before letting them have access to social media. Schools should provide lessons about the dangers of social media and show teens how to be good digital citizens.

Cyberbullying affects people on a daily basis, whether it’s from seeing somebody else getting hurtful comments or reading horrible comments about yourself. These things have been going on for too long, and there needs to be an end. No more innocent people need to get hurt or worse, kill themselves.

It’s time to speak up and stop the threat of cyberbullying.