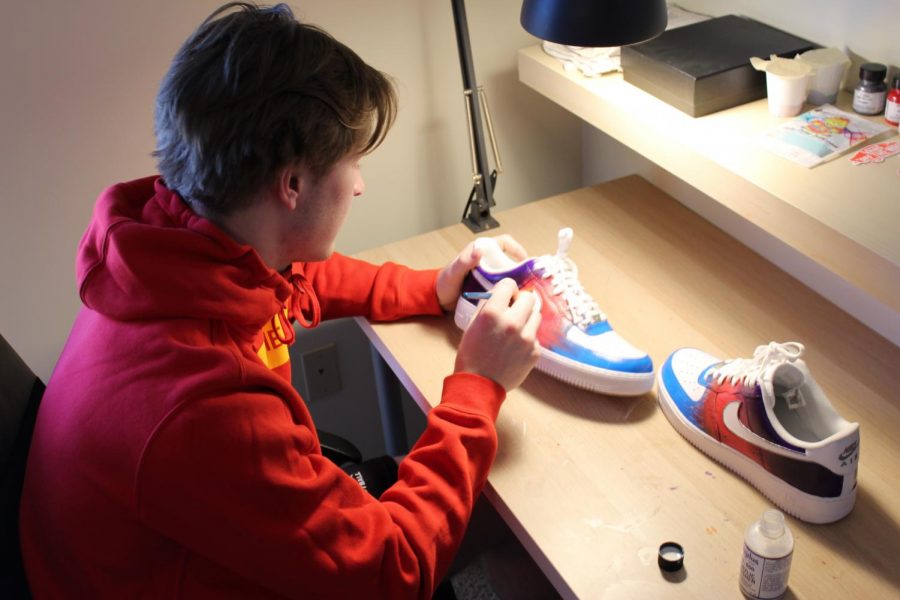 At his desk, junior Keagan Kooi puts the finishing touches on a new pair of shoes. “It’s something I enjoy doing. I think it’s cool to put your own personal touch on a pair of shoes,” said Kooi.

People express themselves through the clothes they wear and customizing their clothes is a unique way to stand out. Junior Keagan Kooi took up a new hobby in customizing his shoes using different techniques to apply paint. He was inspired to customize shoes after watching YouTube videos.

“I saw these videos of people customizing shoes. I thought it was really cool, so I thought I would give it a shot,” said Kooi.

He then posted videos on his TikTok account (@keagankooi) of him customizing a pair of shoes. In one of his videos, he used a technique called hydro-dipping to customize a pair of shoes. Hydro-dipping is used to apply paint to something by spray painting the top layer of water in a bucket and then using a stick to get the paint in a marble pattern. He then dipped an item in, and the paint was applied. When Kooi did a pair of shoes, he had to tape all of the parts he didn’t want paint on and then dip them.

To get started, Kooi had to get a bucket for hydro-dipping, some spray paint, gloves, and some masking tape. Kooi hadn’t sold any of his shoes yet, but he said he would like to so he could start to make some money back. He was holding onto his first couple of pairs until he could get more projects done.

“I need to start selling them to make some money back because it is a pretty expensive hobby,” said Kooi.

Although Kooi hadn’t sold any shoes, his friend junior Ethan Straight bought a pair of Vans he let Kooi hydro-dip.

“It’s unique, and he’s the only one that’s doing it that I know of. So that’s good for him. If he started selling them for cheap, I’d buy them from him,” said Straight.

Kooi said one of the hardest parts of starting a new pair of shoes was figuring out how he wanted to design them. After he got an idea of a design he wanted to make, he then had to prep the shoe. To prep a pair of shoes, he had to use acetone or nail polish remover to get the factory finish off of the shoe. Then he taped off the parts he didn’t want to paint, and then got to painting.

Kooi said the shoe customization was something he enjoyed doing and that he liked to add his own personal touch to a pair of shoes. He also liked to share his work in the videos he posted and see how people reacted to them.

“I really just do it for enjoyment,” said Kooi. “I’m not necessarily trying to make all this money.”

Kooi’s father, assistant principal Kooi said it’s good that Kooi had something to do that is creative.

“I love it. I think it sparks creativity, and it’s one of those things that’s cool to see the end product. To see the hard work, effort and creativity in the end product,” said Kevin Kooi. Everyone’s looking for something different, and it’s something new and innovative. When you put all that together, you get these customized shoes, and it’s a pretty cool situation. No one pair of shoes is like any other.”

Kooi had customized five pairs of shoes and was just getting started. He didn’t know if he would like to start making YouTube videos or just stay on TikTok. All he knew was that he enjoyed this new hobby, and he wanted to continue to customize different types of shoes.