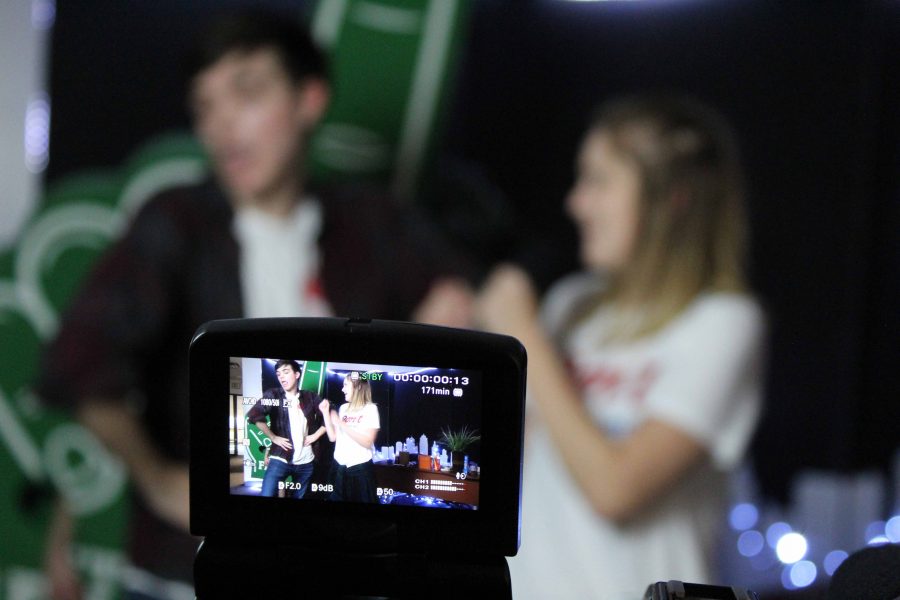 Singing and dancing at the STTV media marathon are seniors Drew Simms and Annika Ruskievicz on Feb. 18 in the STTV studio. The media marathon was live for a total of 12 hours and raised $1,075. “I enjoyed spending time with all my friends at the media marathon, and staying up for 18 hours straight,” said Ruskievicz.

STTV students spent their Saturday in school on a four-day weekend to raise money and bond as a staff. They began broadcasting live at noon on Feb. 18 and ended their broadcast at midnight.

“It was fun at first, annoying in the middle, and then I was really tired at the end,” said Dyke.

It was Dyke’s first year on staff and his first Media Marathon.

“The media marathon was worth it in the end. It was really fun. I’ve been looking forward to it since last year when I was in intro,” said Dyke.

The marathon consisted of many different events over the course of the 12 hours they were live: pancake art, Twister, waxing one of the male staff member’s legs, haircuts and much more.

STTV executive producer senior Adam Freese worked the whole marathon.  As a producer, he gathered videos, came up with video ideas and made sure everything was set up.

“We had lots and lots of audio problems during the marathon. It had its up and downs, but I think its main goal of fundraising and spending time together as a staff was accomplished,” said Freese.

With one of the goals of the media marathon being to raise money, students were required to find at least one sponsor.

The entire media marathon can be found online at StaleyNews.com.